Fight Report: Kovalev Back to Krushing - Blasts Out Shabranskyy in Two 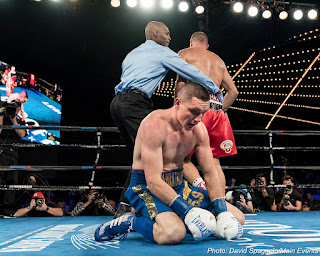 At The Theater at Madison Square Garden, Sergey Kovalev, 174, rebounded nicely from two controversial loses to the recently retired Andre Ward by winning the vacant WBO Light Heavyweight title belt with a second round poleaxing of Vyacheslav Shabranskyy, 174-1/2.  Shabranskyy had spoken about working on his movement and defense before the fight, neither were in evidence on Saturday night.

In the opening round, Shabranskyy looked to back Kovalev up.  That turned out to be a foolhardy strategy as Kovalev worked patiently behind the jab and eventually dropped Shabranskyy with a roundhouse right.  Shabranskyy did not appear seriously hurt but shortly afterwards Kovalev unleashed another right hand that landed right on the button and had him down a second time.  Shabranskyy barely survived the round.

Kovalev patiently stalked to start the second and could not miss with either hand.  Soon Shabranskyy was down a third time.  After a vicious followup left Shabranskyy on very shaky legs, referee Harvey Dock stepped in to stop it at 2:36.

Kovalev expressed interest in fighting all of the other beltholders now that Ward is retired.  He included a special reference to "Chickenson" - WBC Champ Adonis Stevenson, who has appeared to avoid him after initially accepting a fight.  It will be interesting to see if the winner of the co-main, Sullivan Barrera, will be face Kovalev next, now that it's for a world title belt.  Barrera declined to meet Kovalev on this card as he felt the offer to face the "Krusher" was a little light.

Barrera, 174-1/4, put in a workmanlike performance in decisively beating Felix Valera, 174-1/2 ,via unanimous decision over ten.  Valera was crying during his ring entrance and clearly fed off that emotion in the opening round as he exchanged with Barrera and caught him with a beautiful counter hook to drop him.  Barrera, now finding himself on the canvas in the first round for the second consecutive fight (Joe Smith dropped him previously), stayed composed and weathered Valera's followup and later in the first dropped Valera with a right hand.  Valera did not appear too hurt but the knockdown was legit.

In the second, Valera got a little wild and started clowning.  Barrera established his dominance in this round, even though he took a headbutt that caused a cut over his left eye.

From the third round on, Barrera took control as his conditioning and work rate were too much for Valera.  When Valera did land, he tended to go low, as he had points deducted in the third, sixth and eighth rounds and is lucky he did not get DQ'd.  Barrera also went low in the ninth and was deducted a point.  The fight went the full ten but there was no doubt as to the victor.

Barrera won decisively on all three cards - 98-88, 97-90, and 97-89.  He improves to 21-1 (14), while Valera falls to 15-2, 13 KOs.  Barrera's promoter, Kathy Duva of Main Events, stated afterwards that Barrera would be given offers to fight either Kovalev or young WBA Champion Dmitriy Bivol, who was in attendance.  If Barrera's track record is any indication, he will choose the offer with the most remuneration.

There was some real controversy with the decision in the bout between Jason Sosa, 131-1/4, and Yuriorkis Gamboa, 130-1/2.  It appeared to most in press row that Sosa had done enough to win, though it was a competitive fight.

The first three rounds were pretty even as both men landed good body shots.  Gamboa seemed a little busier but there was not much to choose between them.

In round four, Gamboa found his rhythm and clearly won the round with a stiff jab and combinations punctuated with body shots.

Rounds five and six were close but Sosa seemed to take control back slightly.  By the end of the sixth, Gamboa was tiring and holding.

In round seven, Sosa dropped Gamboa.  It looked more like a balance shot but this was clearly Sosa's round.

Rounds eight and nine, Sosa appeared to be a little busier and was getting in good body shots.  Gamboa was still game and trying to win but was clearly tiring and frequently clinching.  His lack of conditioning was starting to show.

In the tenth and final round, Sosa pressed and Gamboa held.  Referee Ron Lipton took a point away from Gamboa for excessive holding.  Not sure that I agreed with taking a point away in the tenth round when both fighters were tired but nonetheless that seemed to seal the decision for Sosa even though it was a competitive fight.

The judges disagreed - scoring 94-94 even, then 95-93 and 96-92 for Gamboa.  Having lost a point on the knockdown and another for excessive holding means that the two decisive judges gave Gamboa 7 and 8 rounds respectively.  The fight just didn't seem that wide for him.  Maybe this was payback from the boxing gods for the draw that Sosa got against Nicholas Walters that most felt he didn't deserve.

The rest of the undercard featured some great prospects on Main Events roster.  Hard punching Bakhram Murtazaliev, 153-3/4, moved to 11-0, 9 KOs, with a clinical chopping down of Carlos Galvan, 151-3/4, 16-6-1, 15 KOs.  The fight was stopped at 1:31 of the 5th after two knockdowns in fifth including a brutal finishing left hook to body.  Murtazaliev is best buddies with Kovalev, whose Krusher Promotions co-promotes him.  Murtazaliev also shares the same trainer as Kovalev - Abror Tursunpulatov.  Friends who train together, whup ass together apparently.

Meirim Nursultanov, 161-1/2, was extremely impressive in stopping previously unbeaten Eric Moon, 162-1/4, at 1:54 of the second round.  Nursultanov went 13-0 in the World Series of Boxing, so his amateur pedigree is outstanding.  He looks like yet another devastating fighter from the Egis Klimas roster.  His pro record (excluding WSB) is now 5-0, 4 KOs, while Moon drops to 7-1, 6 KOs.

Ismael Villareal, 154-12, former two-time NY Golden Glove champ and son of former fighter Otilio Villareal, made his debut a successful one with a four-round unanimous decision over winless Race Sawyer.  Villareal is now 1-0, while Sawyer falls to 0-5.
at November 27, 2017