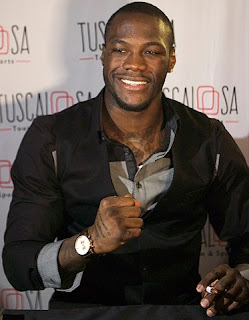 Earlier this week, attorneys for WBC Heavyweight Champion Deontay Wilder and his promoter, DiBella Entertainment ("DBE"), filed a Motion for Summary Judgment against Alexander Povetkin and his promoter World of Boxing ("WOB"), in their long-running case in the Southern District of New York stemming from the WBC Heavyweight title fight between Wilder and Povetkin, scheduled for May 21, 2016, that was postponed due to Povetkin's positive drug test for Meldonium.

In September 2017, District Judge Andrew Carter denied the Motion for Judgment as a Matter of Law and for a New Trial as reported on this blog.  At that time, Judd Burstein, attorney for Wilder and DBE, stated his intention to file a motion for summary judgment seeking damages.

In the summary judgment motion, Burstein argues that Wilder and DBE are entitled to judgment as a matter of law that WOB and Povetkin breached the bout agreement.  The motion alleges that WOB agreed in the bout agreement, drafted by the WBC, that they would deliver Povetkin for the bout.  The WBC made the positive test by Povetkin public on May 13, 2016 and then announced that bout was postponed on May 15, 2016 for the safety of the fighters.  The motion further argues that due to Povetkin's positive test, WOB could not deliver him for the bout and thus breached the bout agreement.

The motion also argues that WOB's claims for breach of the covenant of good faith and fair dealing should be dismissed because there is no evidence to support WOB's claims that Wilder and DBE pressured the WBC into postponing the bout.  Wilder and DBE argue that the postponement was self-inflicted due to Povetkin's positive test.

Regarding the escrow agreement claims, Burstein asks the court to release the escrow funds to Wilder in the amount of $4,369,365 for his purse amount, an additional $27,500 in training expenses, as well as 9% interest on those amounts from the time of the breach.  Burstein notes that the escrow agreement states, "the Escrow Agent shall not disburse any funds unless and until it receives joint instruction from the parties or a non-appealable order from a court . . ., at which time it shall disburse the funds to parties as their interests may appear[.]"

See the Motion for Summary Judgment below:
at November 18, 2017