Jacobs vs. Arias Fight Report – A Lesson In Levels And Being Careful What You Wish For 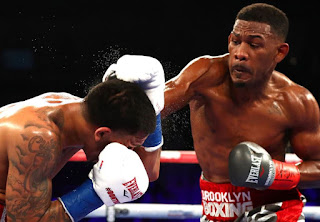 Jacobs, one of the top middleweights in the world, fought angry from round one due to pre-fight provocations from the loquacious Arias.  Arias had goaded Jacobs about not “running” and boasted that he would be “standing in the middle of the ring” ready for war.  It was apparent from early in the opening round that, in fact, it would be Arias doing the “running” (and clinching) with Jacobs holding down the middle of the ring and ready for war.

About a minute or so in, Jacobs appeared to catch Arias off balance with a clubbing right and followed up with a flurry.  Arias offered back a few winging rights to the body and head but was clearly on the run.

Throughout the first three rounds, Jacobs controlled the distance and tried to time Arias with a big right hand, landing a few straight rights and uppercuts.  Arias, when under attack, inevitably dipped and tried to hold.

Round four was better for Arias, as he started to find a home for the right hand.  Jacobs inexplicably started the round in the southpaw stance and muted his own offense.

In round six, Arias finally came out of his shell briefly and some lively exchanges occurred.  Neither man did a lot of damage though Jacobs let his hands go and goaded Arias at the end of the round as Arias tried to hold.

Rounds seven through ten featured more of the same, Jacobs stalking and loading up too much on head shots rather than working the body and head in combination.  Arias still tried to land winging shots but he threw from too far out and seemed afraid to engage and expose himself.  Jacobs also tended to flurry hard in the last ten seconds to try to secure each round.

In round eleven, Jacobs scored the only knockdown of the fight with a cuffing left hook that may have been more of a pull-down than a punch.  Arias was in survival mode and appeared to start favoring his right foot.

The final round had the crowd booing a bit as Arias was in full survival mode.  At the final bell, Jacobs wanted no part of post-fight hugs or handshakes.  Clearly, Arias’ mouth had gotten him pissed and the fight going the distance due to Arias stinking it out didn’t help his mood.

Afterwards, Jacobs and new promoter Eddie Hearn seemed to state a preference for the winner of the WBO Middleweight title fight between champion Billy Joe Saunders and former IBF champion David Lemieux.  With that fight happening next month in Montreal, Jacobs planned to be ringside.  Jacobs stated that he wanted to stay active and be back in the ring in April.  Hearn seemed to confirm the April 2018 date and also the possibility of the Saunders-Lemieux winner.  Hearn also stated that though Frank Warren, Saunders’ promoter, is not the easiest man to make a deal with, he didn’t see any impediments to getting it done.

Hearn has committed contractually to getting Jacobs three fights a year and with a handful (at least four) of HBO dates set aside for Matchroom, it will be interesting to see what 2018 holds for Jacobs.  That level of activity might also attract more US fighters to Hearn.  A representative of the PBC told me that Al Haymon is still involved with Jacobs but clearly Hearn is the one making the moves.  Time will tell if more fighters from the Haymon roster move to Hearn or other promoters who can offer them increased activity.

Arias, for his part, stated that he wasn't making excuses but . . . Jacobs was too big, having rehydrated post-weigh-in to an unknown weight and that a painful blister on his foot inhibited his ability to punch.  But, of course, he wasn't making excuses.  The weight excuse is a bit ridiculous as everyone knows that Jacobs is big middleweight who gets bigger after rehydrating.  When you sign to fight him - you know that's part of the bargain.  Also, the last I checked, the same rules applied to both men.  Nothing stopped Arias from getting big after the weigh-in, just like Jacobs.

After a close first round, a slugfest in slow motion broke out in round two as the two men with a combined 160 inches in arm reach decided they preferred to fight in a phone booth.  Both men landed well but Wach was sucking wind hard by round end due to the pace.

The middle rounds proceeded with more of the sloppy slugfest.  Miller has an interesting technique of throwing a number of just touching punches and then mixing in a few hard ones.  Neither man was getting great leverage or turning on their shots.  One colleague described it as watching someone try to cut down a tree with a dull ax.  It was two big men trading mostly arm punches but it was not unexciting.

Apparently, Wach injured his right hand at some point and the doctors were checking on him.  This lead to what looked like a bizarre stoppage barely a minute into round 9.  Wach did not complain.

Miller moves to 20-0-1, 18 KOs, Wach falls to 33-3, 17 KOs.  Though Miller mentioned WBO champion Joseph Parker as his preferred opponent after the fight, his co-promoter (and my former client – full disclosure) Dmitriy Salita seemed to be a bit more non-committal.  Further discussion with Eddie Hearn seemed to hint at a possible Miller vs. Dillian White fight in April.  If this is what Hearn has in mind, that would seem to indicate that Parker may be the preferred next opponent for Hearn’s number one charge, IBF, WBA, and IBO heavyweight champion Anthony Joshua.

Regarding WBC champion Deontay Wilder’s reaction to Miller’s performance, he texted, “I’m speechless. (Laughing to tears emojis.)  I’ll continue sipping my tea.” (Reference to Joshua’s tweets from earlier in the week when reacting to other heavyweights calling him out).
.
In the first co-feature fight that HBO televised, local fighter Cletus “The Hebrew Hammer” Seldin, 141.2, Long Island, NY improved to 21-0, 17 KO’s, with an absolute mauling of Roberto Ortiz, 141.2, Torreon, MX, who fell to 35-2-2, 26 KO’s.

Chants of "Hammer!" rang out through the arena for Seldin as he entered and he did not disappoint.  Less than a minute in the fighters exchanged right hands with Seldin getting there first and putting Ortiz down.  A follow-up flurry punctuated by a shot that appeared to land behind the head put Ortiz down a second time.  Ortiz tried to rally but was on shaky legs.

Round two saw Seldin land another hard right hand that caused a nasty cut above Ortiz’ left eye.  Ortiz landed a few decent shots in the round but the difference in strength was apparent and heavily in Seldin’s favor.

Late in round three, Ortiz took a knee after getting hit squarely by a pointed Seldin elbow right on his left eye.  Seldin has a peculiar habit of sometimes pointing his left elbow straight out and here it ended up as a weapon.  The ringside doctor stopped the fight.  Though the left elbow square in the face clearly caused the fight to end, the victory was given to Seldin by TKO.  This might have been a missed call on an accidental foul that could have resulted in a no contest ruling.  However, Seldin was clearly the superior fighter.

Afterwards, Seldin proclaimed himself ready for a title shot.  His promoter Joe DeGuardia was amenable to that but also would like to see if he could make what would be a big local fight between Seldin and fellow LI resident and former WBO super lightweight champ Chris Algieri.

On the undercard, a scheduled six-round welterweight bout featured the son of former WBC Super Middleweight champion and Hall of Fame nominee, Nigel “Dark Destroyer” Benn.   London’s young Connor “The Destroyer” Benn, 147.8, lived up to his nickname and family legacy by devastating Brando Sanudo, 148.4, of San Felipe, MX, with a sizzling left hook to the liver for the KO at 1:00 of round two.

Benn appears to be another rising star in the growing Eddie Hearn/Matchroom roster.  Benn’s father has taken the approach of not being involved and taking attention away from his son or putting undue pressure on him.  An admirable approach, but we’ll see if he can contain his pride and excitement as his kid climbs the ladder.

Veteran local ticket seller Tommy Rainone escaped with a draw against George Sosa in another six round junior middleweight contest.  Rainone is now 28-6-2, 6 KOs, and Sosa stands at 15-10-1, 15 KOs.